Held at the Commissioner’s Office building, the reception was attended by high-ranking officials and dignitaries, H.E. Commissioner Xie Feng, China’s top diplomat in Hong Kong announced that ‘The Commissioner’s Office of the Ministry of Foreign Affairs of the People’s Republic of China in the Hong Kong Special Administrative Region has and will persevere at assisting the Hong Kong SAR better participate in the Belt & Road Initiative (BRI) by putting forth all of the office’s diplomatic resources” at the 2019 Spring Reception and “Friends of Diplomacy” Award Presentation Ceremony, on Wednesday,  January 30th, 2019 in the presence of: 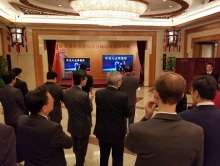 The BRI countries included members of the Association of Southeast Asian Nations. Indonesia, Myanmar and Thailand are among the countries the Office wants the Hong Kong SAR to engage with; adding that as such, the Commissioner’s Office is helping the territory at embracing the development of the Nation as a whole.

Furthermore, Commissioner Xie said his office has striven to engage more young people in Hong Kong SAR by helping over 700 of them through study tours in BRI countries.

Commissioner Xie indicated that in the future the Commissioner’s Office will work with the Hong Kong SAR to help talented local young people attain experience in international organizations including the United Nations (U.N.). By doing so, such initiatives will open up new areas for young Hong Kong talents to excel and better serve the Nation.

Commissioner Xie described the Hong Kong SAR compatriots as “the upholders of national sovereignty, security and development interests”, also saying they were “the facilitators of cultural exchanges between China and the rest of the world, the practitioners of opening-up strategy for win-win outcome and contributors to China’s participation in global governance”.

The Spring Reception saw the first “Friends of Diplomacy” Award Presentation Ceremony, organized by the Commissioner’s Office. The Award is to commend Hong Kong individuals who have made remarkable contributions to the country’s diplomacy.

This year’s four “Friends of Diplomacy” Award recipients were:

This entry was posted on Thursday, January 31st, 2019 at 2:58 pm and is filed under Uncategorized. You can follow any responses to this entry through the RSS 2.0 feed. Responses are currently closed, but you can trackback from your own site.